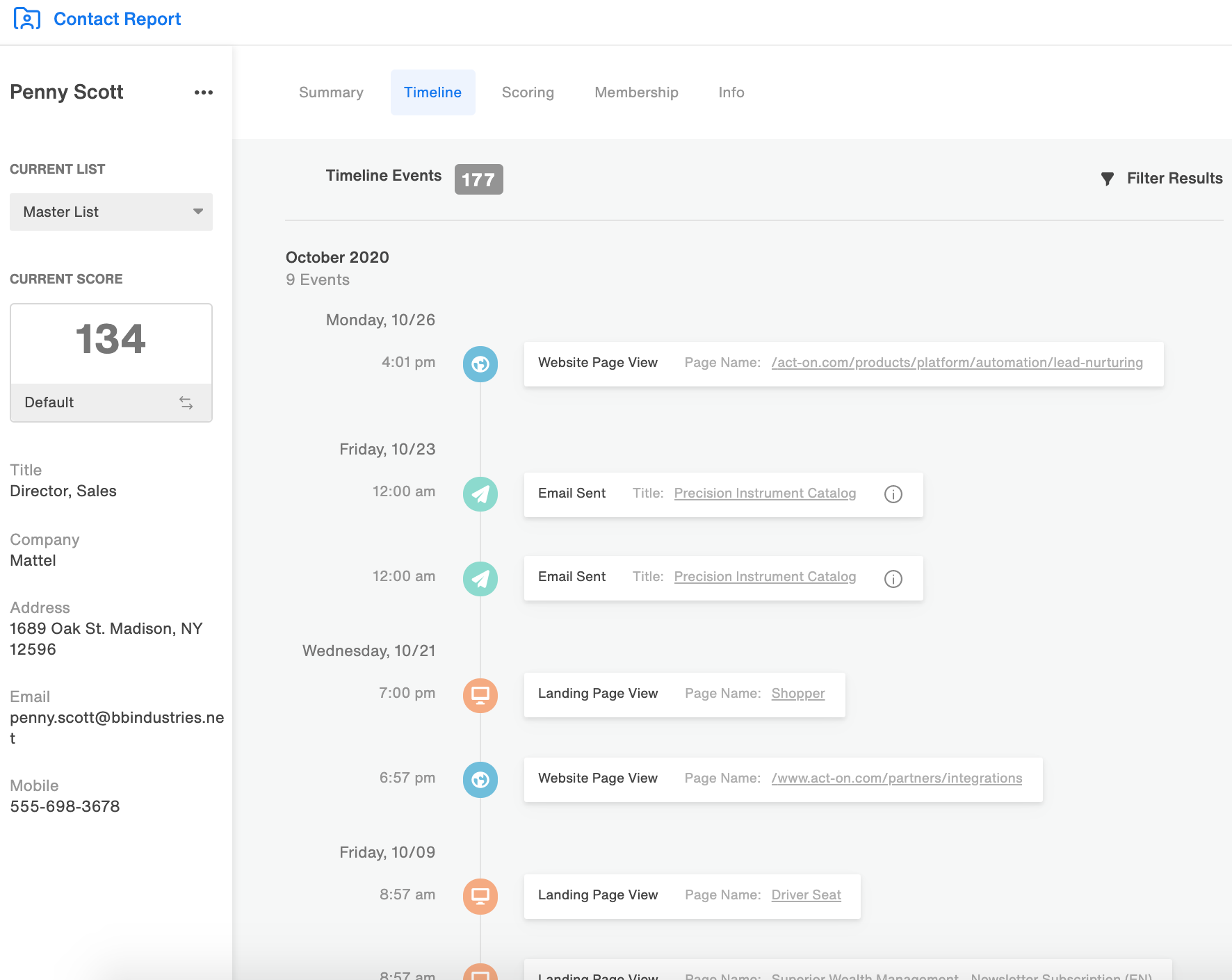 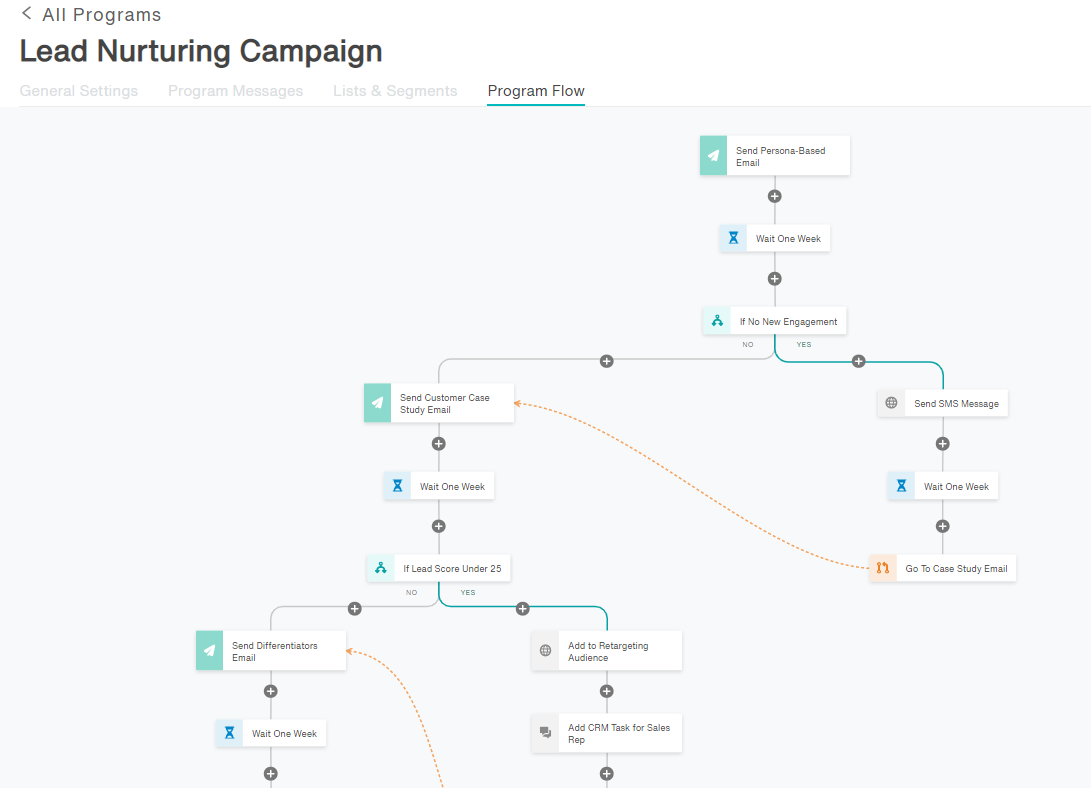 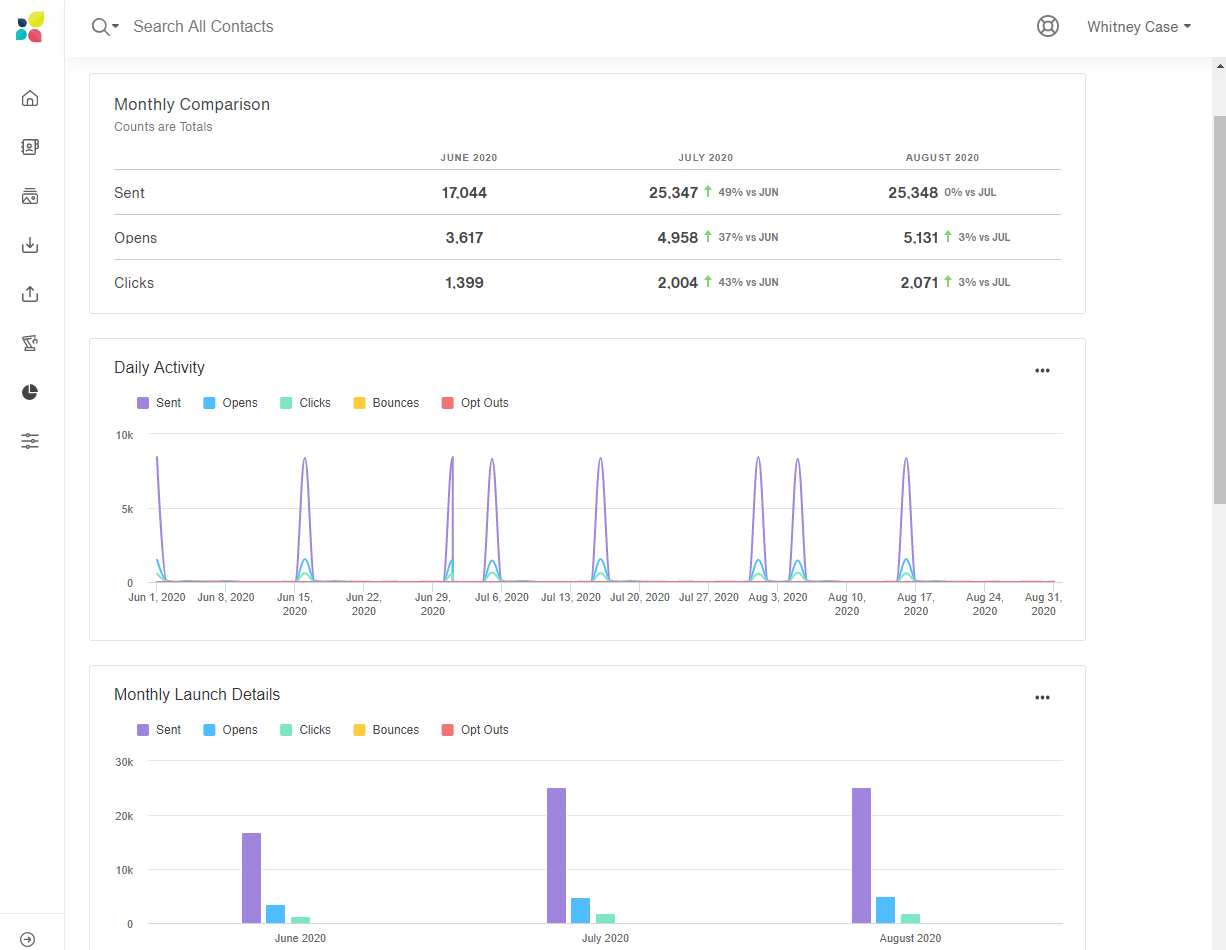 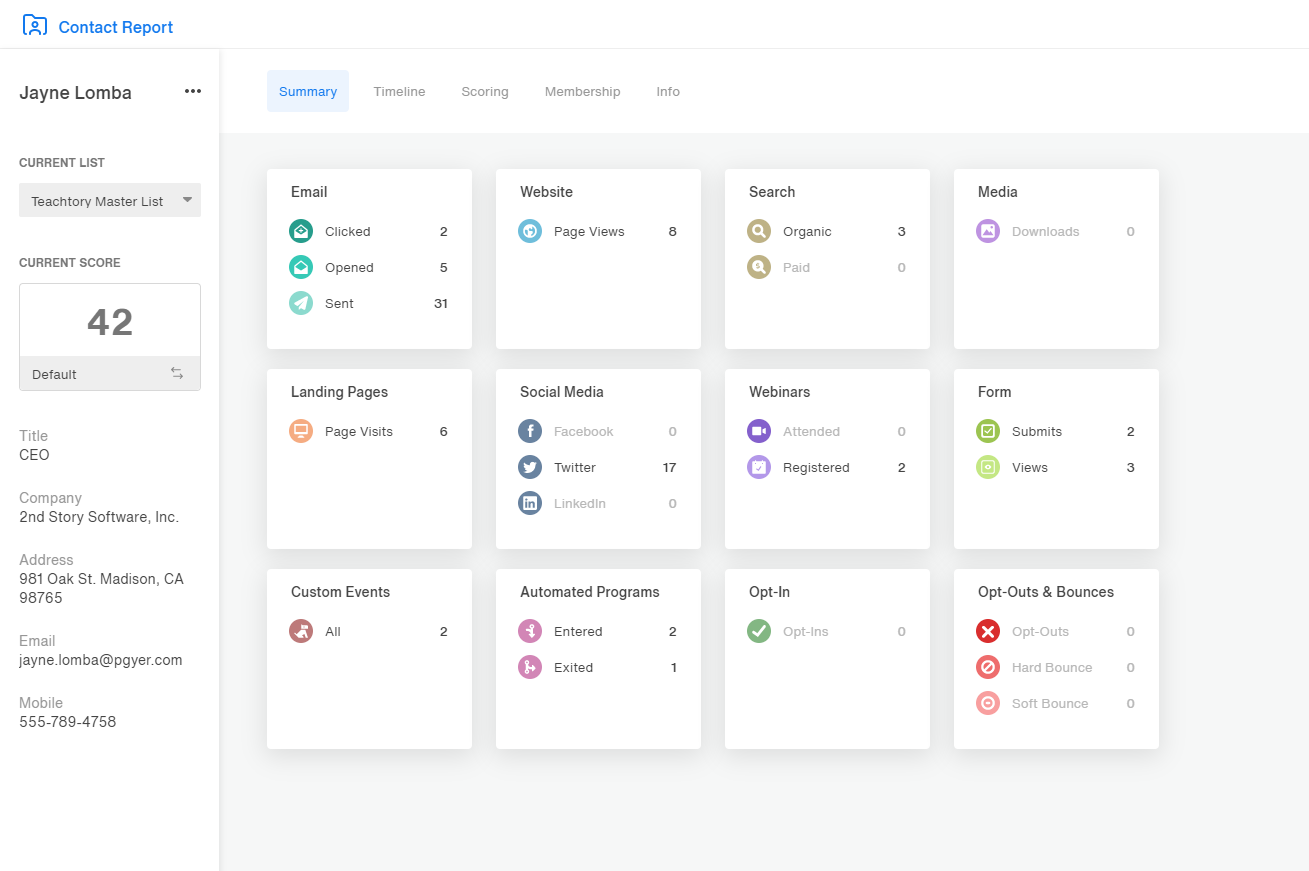 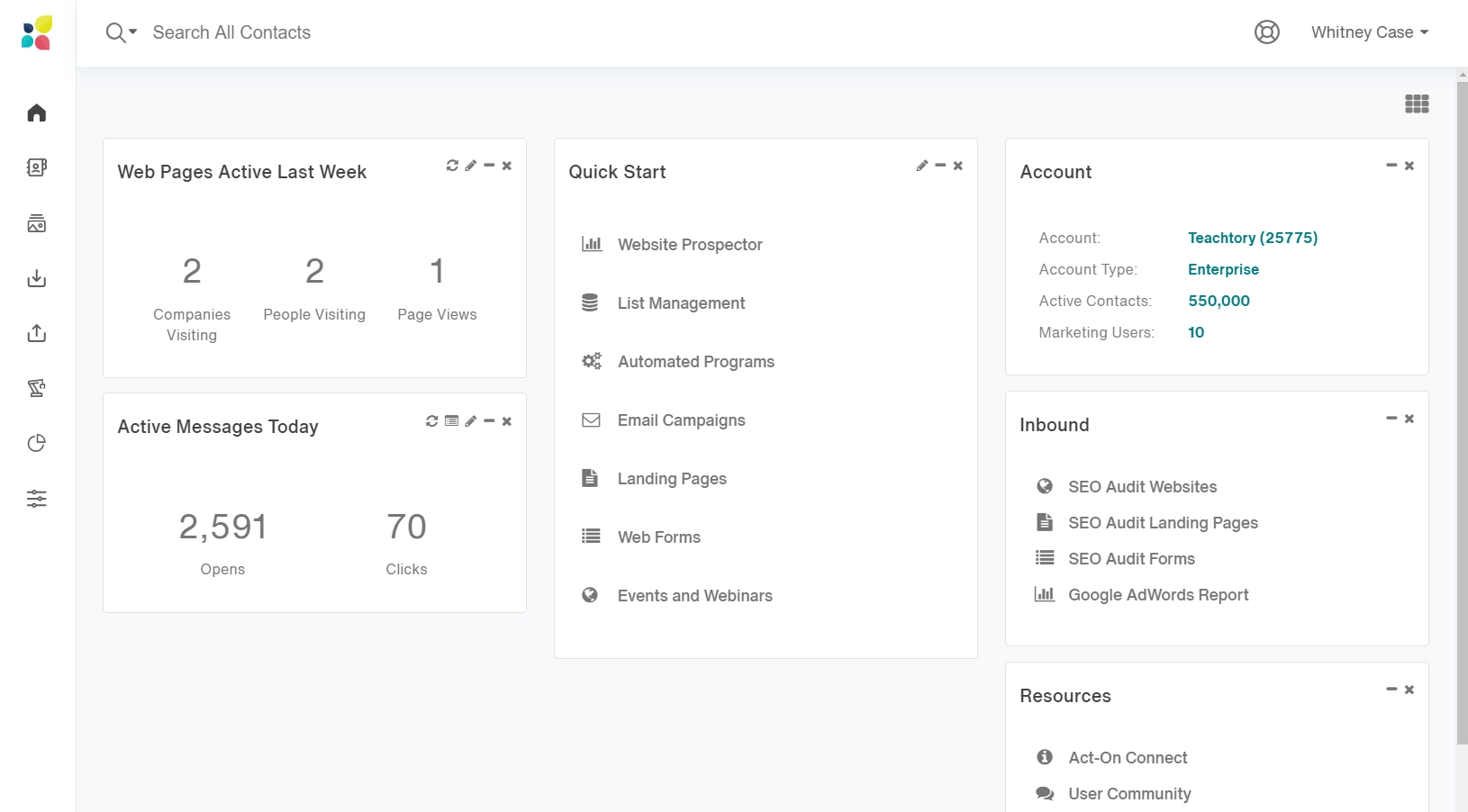 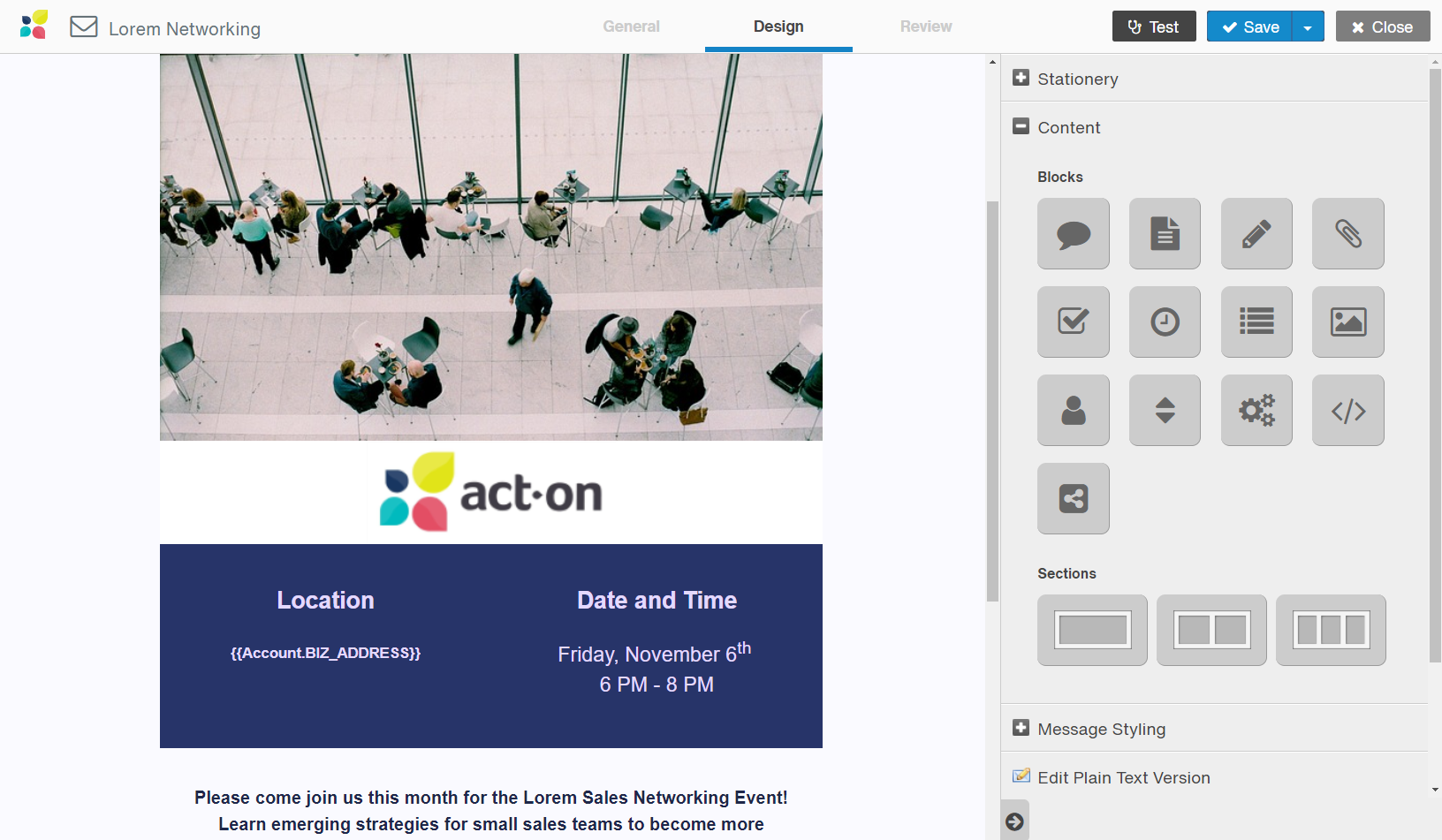 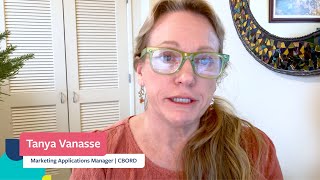 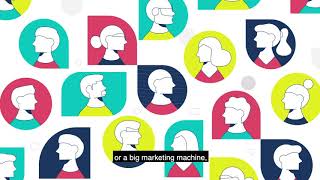 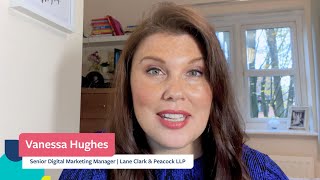 Having a marketing automation tool such as Act-on is a really benefit to run successful marketing...

Having a marketing automation tool such as Act-on is a really benefit to run successful marketing campaign. When we started using Act-On, we realized we were not as organized as we thought we were; It kind of "forced" us (in a positive way) to rethink our campaigns, how we built them and what we expected from them. We were able for the first time to really segment and target our audience. We saw a significant increase in our opening and click rates, we could trigger more interest by sending relevant content to our audience, and this led us to more qualified and interested leads.

This tool allowed us to track our audience and create reports on our tasks and projects such as events, webinars, digital campaign (including google adwords, social media posts, emails, website, landing pages). It is a must-have in our marketing tech-stack.
We would advise to really define your needs and do some benchmark; Act-On is a great tool to build segmentation, automated programs, nurturing programs and it can be integrated with many other tools, to create a great and efficient tech stack. It definitely is a tool worth having, but it requires to know where you want to go and what you want to achieve.
It took us a few months before understanding and mastering most of what you can do within the platform, and we’re still learning. So be persistent and don’t be afraid to “play with” and test the tool, it’s totally worth it.

Act-On’s automation platform is intuitive, I like the way the menu is built, it’s been made in a logical order so that when you move from one section to another, you go down the logical path to build automation.
The support team is great, they’re efficient and patient ! There are many ways to find answers and tips; the Act-On community, the Act-On university, the online training courses, the webinars, everything is made for us to easily learn and efficiently use the platform.

Sometimes it takes us quite some times to do some simple tasks, for example when editing a step in an automated program, we have to wait a few seconds for the system to record what we edited and allow us to move to the next step. When there are many steps, it can become frustrating. Another example is when editing an image using Act-On editor, it can time many minutes before we can see the changes on the image where it’s being used (in emails, landing page, etc). These delays can be a bit frustrating when you are working on a template and you can’t finish it because some of the assets are still being processed by the system.
The marketing calendar is a bit confusing sometimes, I see messages that have not been sent marked as sent, and we can only have a month view unless we export the details.

Thank you for posting your review. It's always great to get customer feedback on what's appreciated and what could be improved upon. Thanks again!

One of the Best Marketing Automation Programs I've Ever Used

My sales and marketing team had so many benefits from this software. The marketing and data...

My sales and marketing team had so many benefits from this software. The marketing and data analysts had high-level, quality reports that were as detailed or as broad as they wanted. The sales team had live information about their hottest leads and could rely on the lead-generation process to do things automatically. They didn't have to worry about information not being part of the CRM from Marketing because the integration made that seamless. Truly a great program and I didn't even have enough characters to talk about all of the other features too!

Next, it integrated with our website - it also has the ability to design your own website within ActOn that allows for even more neat features. It tracked users across emails & webpages and the reports allowed us to drill down to specific geographical areas of activity, key words used, which pages they were on and for how long, etc. It also gave a numerical value (that you can custom set) to each action and at a certain point could put that contact into a sales cycle or send an alert to the sales team to reach out to them.
Lastly, the automated marketing feature was THE BEST. You have the ability to design a multi-faceted campaign that could run for a set amount of time, or indefinitely. What I found to be the cherry on top was that you could set actions for contacts who didn't do certain things (didn't click, didn't open, etc) and then repeat steps or put them into different tracks.
As huge as this program seems, it was also incredibly easy to navigate. Saved our teams a lot of time and energy.

The most challenging features were the design elements. It was very template based and it took some CSS or HTML skills to make them less-standard. This was true for everything - emails, web pages, landing pages, etc.

Thanks so much for your enthusiastic review of Act-On! We really appreciate it and are glad to hear about your excellent experience with our solution.
Happy Marketing!
Sarah

Act-On is a robust, yet easy-to-use solution that combines multiple marketing applications into one. It has been a workhorse for us. While it can serve more than a dozen vital functions, including social media management and ABM, I most appreciate its integration with our CRM system (Microsoft Dynamics 365) and how it can be used to automate nurture programs, score leads based on behavior/engagement, and monitor web site visitor activity. I’m also very impressed by members of the tech support team who are very patient and have bailed us out of an after hours pinch more than once.

Keeping up with the constant evolution of Act-On is a full-time job. I often feel like we’re 5 steps behind in understanding newly released features and everything it can do. Of course, that’s a good problem. My only true critique is that the organization seems to have gone through some growing pains and lost its personal touch along the way. When I first selected and implemented Act-On at my previous company 4 years ago, I felt like our sales rep and implementation team were truly invested in our success. I was so impressed by the product and Act-On’s customer success team that I implemented it again at my next company and recommended it to several peers. However, faces began to change quickly, and we had 3 different reps in the same year. Our new contacts were less interested in our success and more interested in what we could do for them. One became obsessed with recruiting our company as a reseller. Things have settled down, but I don’t feel like they value our business as much as they once did.

I started out using Marketo years ago and while I was a power user and loved the depth of features,...

I started out using Marketo years ago and while I was a power user and loved the depth of features, others in the company found it to be complex and most could use it for only the basics.

I moved on to Pardot and I really liked it, and I even attended their user conference three years ago in Atlanta - which unfortunately, was when they pass along the news to customer that they have been acquired and would end up Salesforce's portfolio. Pardot was moved into their Sales Cloud (and ExactTarget went to the Marketing Cloud), and the result has been, other than some UI improvements, almost no innovation at all... and a major rise in costs, where it's extra for phone support, they charge for Salesforce Engage, they charge for Wave Analytics, etc. etc.

Meanwhile, Act-On has been the steady player in the market that has continued to advance - and you see that in Forrester's Q4 2014 Wave report where Act-On moved to the upper, Leader quadrant ahead of Pardot and HubSpot (though, I'd say that HubSpot has always been more "Movement-First" versus "Product-First" where they invest more in their marketing then their marketing features, particularly with their focus on their CRM now).

Act-On received a large round of investment money, brought in loads of new talent on the executive team and down, and continue to push out new features faster than others on the market. They were first to launch Account-based Marketing, their Social tools are very advanced (Forrester scored them higher than HubSpot for example), built Data Studio that allows us to push to our BI easily (Tableau), they overhauled all of their composers (email, landing page and forms), added dynamic content & personalization features, and added a unique way to create Program Templates that is awesome and now have a growing library of templates you can grab and use that build out all the nurture program steps for you automatically (including sales alerts, CRM campaign updates, basic or advanced if/then scenarios, etc.).

I've always thought that price should not be a big driving factor for which tool to use. But, their Active Contacts model allows you to pay for what you use, versus the size of your database - and where Marketo and Pardot are adding more modules, Act-On includes everything in their Enterprise edition. And their Support is also fantastic.

Don't be fooled. This is an advanced tool that medium and large companies are using.

Sincerely easier to use than others on the market, great overall feature set, love the dynamic content options, program templates were a game changer, account-based marketing provides visibility into how programs are doing at the Account-level that we haven't had.

The UI is slowly being overhauled but I'd like to see this go faster. Their out-of-box reports aren't great, but I haven't run across a marketing automation platform who has great reporting (I do like Marketo's Opportunity Analyzer report) and we use Data Studio to simply pull data out the way we want it to populate our reports in excel or Tableau

Our overall experience has been great as we have been able to drive leads, gain marketing insights,...

Our overall experience has been great as we have been able to drive leads, gain marketing insights, and develop automated programs with easy to use templates we created.

Act-On offers automated program templates, all of which are completely customizable to meet our needs in driving leads in our marketing plan. The ease of use which is visually appealing with drag-and-drop, list segmenting, lead scoring options and integrations all work for our organization on both the user level and administrator level.

Pricing as this tool is at the higher end of some marketing resources. Also, the inability to schedule integrating segment runs at the earliest of four hours has caused issues with some of our marketing aspects.

We were in need of a very comprehensive social media and automation tool and Act-On was highly recommended and after test driving, the ease of use and functionality proved itself.

Hi Ashley,
Thank you for posting a review! We appreciate your feedback.
Cheers,
Sarah